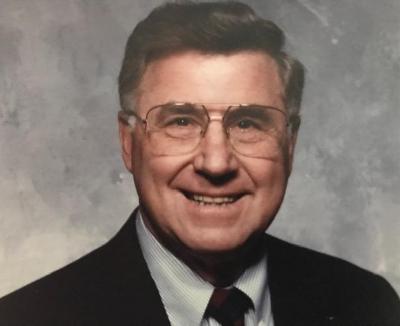 Dr. Michael J. La Place, 89, a New Jersey native and recently a resident of Timonium, Maryland, passed away on March 19, 2021.  Michael was born in 1931 in Jamesburg, New Jersey, the son of Peter La Place and Philomena Dipierro La Place.

An excellent student and athlete at Jamesburg High School, he went on to receive a Bachelor of Science degree in Geography from the College of New Jersey where he also lettered in soccer and track.  Continuing his education, he did his graduate work at Rutgers where he earned a Masters degree in Geography, a Master of Arts in Education Administration and a Doctorate in Education.

Michael joined the New Jersey National Guard during college and enlisted in the United States Army.  After being stationed at Fort Hood, Texas, he served with the 4th Infantry Division in Germany, 1956 -1957.  Returning to the United States, he completed his military service with the National Guard.  Michael worked in the Edison Township School system for almost 40 years, first as a teacher and later as an administrator.  He was especially proud to have been a member of the administrative team that opened John P. Stevens High School in 1964.

Michael married the former Clare Coyle of New Brunswick, NJ in 1959.  They lived briefly in Edison before moving to Piscataway where they raised their family.  In retirement, he and Clare moved to their dream home “Down the Shore” on Chadwick Island, Toms River Township.  Michael loved history, newspapers, books, magazines, food, travel and golf but most of all the company of his family and friends.  And he was an extraordinary friend to all, generous, loyal, funny and caring.

A devout Catholic, he served as an altar boy growing up and was active in the Newman Club at college.  As an adult, he served his home parishes in many capacities, from fundraiser and volunteer to Eucharistic Minister.  He participated in religious retreats for most of his adult life.

Michael was a devoted son, brother, husband, uncle, father, grandfather and great-grandfather. He is survived by his sister, Carmel Loprano of Livingston, NJ, his daughters Anne Zernicke of Natick MA and  Clare Polomski of Cockeysville, MD, his sons Michael La Place, Jr. of Westfield NJ and John La Place of Fort Lee, NJ, sons-in-law Paul Zernicke and Paul Polomski, five grandchildren, four great-grandchildren and ten nieces and nephews.   He was predeceased by his loving wife Clare who passed away on March 16, 2021, his sister Mary Anne La Place and his brother, Frank La Place.

The arrangements are under the direction of the Timothy E. Ryan Home for Funerals. Due to the current COVID19 pandemic and health emergency, there will be no public viewing or services.  The family is planning a celebration of Michael and Clare for later in the year at the Jersey Shore.  In lieu of flowers, please consider making a contribution in his honor to the Shriners Hospitals for Children https://www.shrinershospitalsforchildren.org/shc/donate or to your favorite healthcare charity.  Condolences may be sent to www.ryanfuneralhome.com

A service summary is not available

We are deeply saddened to hear of Mike's and Clare's passing. They were dear, sweet loving friends and we will miss them.
Mike was a college friend. and we  competed  together on the Trenton track team. Later we met Clare at a Naples college reunion. We heard stories of the kids and grandkids . We ate together, laughed together and always enjoyed their company.
Our  sympathies to the family

Extending our deepest sympathies to the LaPlace family on the behalf or Reverend Frederick Kochan and myself.  Fr Fred cherished his friendship with Mike and Clare.  They were most kind and generous to him.  I truly enjoyed my encounters with them on occasions I spoke with them at St Pios Chruch in Lavallette and breakfasts at the  Sand Dollar after mass with Fr Fred.  They were wonderful souls!   We are saddened by their passing. They are deeply missed and we pray for the repose of their souls.

Mr. LaPlace and Mr. McGowan were first year teachers of the 6th grade in 1956-57. The best time in school.  They both moved along with us to Jr. High at Edison High School, where I was again lucky to be their student.  I came to know Mr. LaPlace quite well and remember when he found the girl of his dreams, Clare.  I attended their marriage and also attended his retirement tribute.  I didnt know he so near my home! I am sad about that.  He was responsible for me becoming a teacher.  I truly loved and admired him.  On behalf of the Edison High School Class of 1963, I extend sincere condolences to the family of Michael and Clare LaPlace.  Lois Doll Cavico

My deepest sympathies to the family and friends of "Mr. LaPlace."  It brought tears to my almost 74-year-old eyes to see his obit mention that he was so proud of being part of the administration that opened John P. Stevens HS in Edison in 1964.  I was part of that first senior Class of '65.  He was so, so tremendous as a school official -- but most importantly as a role model for his students.  I don't recall us ever crossing paths after I graduated in June of '65.  A true regret.  He made our senior year -- in a brand new school that had to establish so many new processes and groups involving students and faculty -- a real learning opportunity.  That first year was a real success, and looking back, I think he really deserved most of the credit.  A quiet, friendly, but authoritative leader.