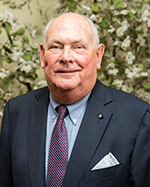 Mr. Ryan was born in Orange, New Jersey and in his youth lived in Bloomfield, & Howell Twsp., New Jersey.

He started his funeral director career as an intern at Poulson & Van Hise Funeral Director’s of Trenton & Lawrenceville, New Jersey. Mr. Ryan than went on to serve the remainder of his internship with his uncle Jack, at the John J. Ryan Home for Funerals, Keansburg, New Jersey.

After receiving his Mortuary Science License, he became the manager of The Colonial Funeral Home in Lavallette, N.J. He served as manager for 10 years and than purchased the funeral home in Lavallette, & another location in Seaside Park, New Jersey from John Cutaio and renamed the firm the Timothy E. Ryan Home for Funerals.

Tim is a member of the Board of Trustee’s at Community Medical Center, Toms River, New Jersey and a Trustee at The Garden State Cancer Center, Belleville, New Jersey.

Mr. Ryan served the community of Seaside Park as a Councilman. As a councilman he was chairman of the Water/ Sewer Department. He was also Past President of the Coast Guard Building Restoration Fund Raising Committee. Was a candidate for U.S. Congress in Third Congressional District of New Jersey.

In addition , he in the Boro of Lavallette, New Jersey served on the Mayors Advisory Committee, Environmental Protection Committee, Past President and Director of the Board of Public Assistance, The Lavallette First Aid Squad, as Past Secretary.

His other memberships include The Ancient Order of Hibernians, Division #1, Toms River, New Jersey where he served as President and was honored as Irishman of the Year.

The Rotary Club of Seaside where is served as President. The Ocean County Emerald Society, The Jersey Shore Irish American Club, who also honored him as Irishman of the year. The Jersey Shore Friendly Sons of St. Patrick, where he was honed as Irishman of the year. The Order of The Friendly Son’s of the Shillelagh of the Jersey Shore. He was invested as a Knight of Merit with Star in The Sacred Constantinian Order of St. George. Mr. Ryan is also a Knight Commander in The Equestrian Order of the Holy Sepulchre of Jerusalem. He is also a member of the Knights of Columbus, Council #8413 and the Msgr. John Baldwin Assemble 4th Degree Knights of Columbus.

Mr. Ryan was also recently given the honor of becoming an Affiliate member of the Order of Friars Minor, Assumption Province. Where he was invested with the Habit of the First Order.

He has been named Outstanding Citizen of the Year by District 12 V.F.W. Ocean County, and also the Silver Holiday Post 10185 V.F.W. Recipient of the Humanitarian Award from The National Conference of Christians and Jews. The James E. West Fellowship, from the Jersey Shore Council Boy Scouts of America and the Adolph E. Woolley Award, the highest honor given by The Three River District, Jersey Shore Council, Boy Scouts of America.

He is married to the former Denise Putlock. They live in Sarasota, FL and Lavallette, NJ with their Golden Retriever Brody. His daughter Erin is a graduate of Mercer County Community College in 2013 and currently working at the Funeral Home.

“To me funeral service is not just a career but a Vocation.”- Timothy E. Ryan